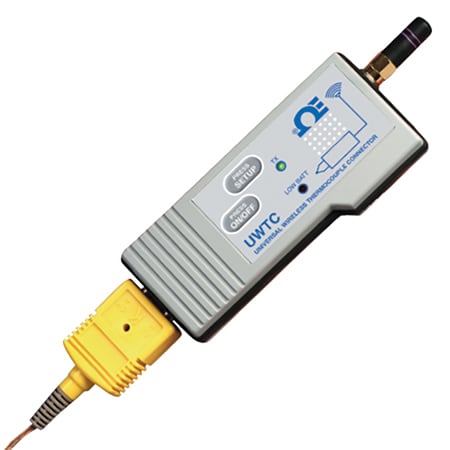 Each unit can be programmed in the field to work as a type J, K, T, E, R, S, B, N or C calibration connector or RTD inputs. When activated the transmitter/connector will transmit readings continuously at pre set time interval that was programmed by the user during the initial setup.

Each unit measures and transmits: Thermocouple/RTD Input Reading, Connector Ambient Temperature, RF Signal Strength and Battery Condition to the host and is displayed on the PC screen in real time using the provided software. When used with host receiver UWTC-REC1 data from up to 48 wireless thermocouple connectors can be received and displayed.

Each unit includes free software that converts your PC into a strip chart recorder or data logger so readings can be saved and later printed or exported to a spread sheet file. When used with host Transceiver UWTC-REC2 wireless data from one connector can be re-transmitted out of the receiver by a wired connection as an analog voltage or current to interface with a controller, PLC or data acquisition board.

More receivers information is available as the following:
ZW-REC ZW-REC: 127-channel wireless receiver with Ethernet for web-based monitoring
UWTC-REC1_2 UWTC-REC1: 48-channel wireless receiver with USB
UWTC-REC1_2 UWTC-REC2: 48-channel wireless receiver with USB and single analog output
UWTC-REC4 UWTC-REC4: 48-channel DIN rail mount wireless receiver with USB and four analog output signals
All Models
Reviews
Rated 4 out of 5 by Steve from Good wireless alternative Was pretty easy to set up, has a surprisingly good range. Just wish the battery life was better.
Rated 4 out of 5 by Jeff W from Nice Product but... I purchased this wireless thermometer to record temperatures and log them on the included software for our state health department requirements. I am happy with the quality of the unit but I am disappointed that I can't use the software because it doesn't work with our Windows 10 machine. The tech support said they haven't updated their software drivers to work with Windows 10 yet. Hopefully soon so I can start recording temperatures.
Rated 2 out of 5 by ChuckB from One of two units failed. Our shop has 10 wireless Omega Sensors (two UWTC and 8 UWRH) 9 of them have worked very well for almost a year. The web configuration was a little crude (and for us the online plots don't work, but we don't need them). One sensor "failed" and was sent back to Omega. The first tech told me it worked on their system and he sent it back. When it arrived back (months later) I still could not read data from the sensor and scrapped it.
Rated 5 out of 5 by Paw Paw from Great product for unusual application We are using this unit, here at The AG and Forestry Museum in Jackson MS, on a 1929 oil engine that operates the oldest operating cotton gin in the united states. The unit is mounted to the connecting rod barring inside the engine and rotates with the barring while the engine is running. This unit allows us to monitor engine vibrations and connecting rod barring temprature in real time, with a laptop computer, while we are ginning cotton. We have used this setup for several years with great success. Great product that has saves us from catastrophic engine failure of a engine that cant be replaced.
Rated 1 out of 5 by Bob23 from Does not work anymore after 4 months I have not been able to use it after few month I bought it. I cannot etablish a connection the UWTC anymore. I have reach Omega, the gave me advices that did not work at all and ask me to send it back. It does not even come with a battery integrated. You have to buy the battery separately and it uses a 3.6V AA battery which is very hard to find. Why not using a standard AA 1.5V battery? Moreover the product seems to work on a very old technologies and have not been updated since a while. I would NOT recommend this product, I find out competitors product that use standard 1.5V battery and that does not need the receiver, and you can even plug 2 thermocouples on it...
Rated 5 out of 5 by James4 from Works Well in a Tough Application We bought this as an experiment for use in a rigorous tire testing application. Even after being exposed to high levels of vibration and about 1500 RPM rotation many times, the unit still works and is calibrated. I couldn't be more impressed.
Rated 4 out of 5 by Mosaic Color and Additive from Rotational Plastic Molds The wireless thermocouple works great for our quality department using a rotational plastic molder to expand our testing. It is a simple product that makes it easy to read the temperature inside the mold. The only problem we have is the connecting wires are very thin, and have problems with breaking, or coming loose. Only other problem we have had in the past is, if we let the battery sit in the thermocouple it will go dead faster, so we remove it each time.
Rated 3 out of 5 by EL1070 from Handy in certian situations We bought this with the intentoin of monitoring temps inside our equipment while it was running. Although it would work if you were in the same soom, it struggled to connect through more than one wall, so a computer would have to be left in the lab to record data, we could not log data while at your desk in an office environment. At that point it is a pretty big waste of a computer. I found another omega product that works better for my application becuase you can log data directly on the device nad you do not need to transmit, freeing up my laptop to keep getting work done. If you do buy this product I would make sure that you also purchase all the necessary accesories for it to work. With this product alone you can not connect, you must also purchase a reciever and power supply.
Support Materials
Manuals & Guides (1)
UWTC_manual user manual
Compliance Certificates (2)
Questions And Answers

will the UWTC-1 software run on windows 10

Asked by: GDunham
Yes the latest version of software is Windows 10 compliant here is a link: ftp://ftp.omega.com/public/DASGroup/products/UWTC/TCC_1.12.16.0818.zip
Answered by: cw3engineer

Are there dimensions available for the mounting bracket?

Asked by: Johns
Hello John The unit does not have a mounting bracket available.
Answered by: JA Engineer

Is this device able to read out temperature even if the thermocouple is connected to a high common mode voltage (~1-2 kV)?

Asked by: Dajo
Hi, thanks for connecting with Omega. The UWTC-2 is only designed for t/c signals which are equivalent to dc millivolts. High voltages of this magnitude would certainly damage the unit. Please email us at das@omega.com with any further questions. Thank you.
Answered by: Jane

Do the accuracy specification apply to the entire ambient/CJC temperature range?

Is the UWTC-2 temp transmitter compatible with the MWTC-REC1-915 receiver?

Asked by: Jim Bob
Hello Jim The UWTC-2 is not compatible with the MWTC-REC1-915 receiver. It will work with either the UWTC-REC type receivers or with the ZW-REC receiver.
Answered by: JA Engineer