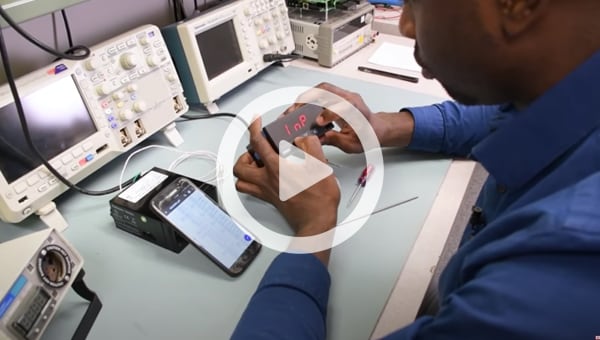 RTDs - or Resistance Temperature Detectors - are temperature sensors that contain a resistor that changes resistance value as its temperature changes. The most popular RTD is the Pt100. They have been used for many years to measure temperature in laboratory and industrial processes, and have developed a reputation for accuracy, repeatability, and stability.

Most RTD elements consist of a length of fine coiled wire wrapped around a ceramic or glass core. The element is usually quite fragile, so it is often placed inside a sheathed probe to protect it. The RTD element is made from a pure material whose resistance at various temperatures has been documented. The material has a predictable change in resistance as the temperature changes; it is this predictable change that is used to determine temperature.

This page will help you better understand RTDs, but you can also speak to our application engineers at anytime if you have any special measurement challenges.

Benefits of Using a pt100

The pt100 is one of the most accurate temperature sensors. Not only does it provide good accuracy, it also provides excellent stability and repeatability. Most OMEGA standard pt100 comply with DIN-IEC Class B. Pt100 are also relatively immune to electrical noise and therefore well suited for temperature measurement in industrial environments, especially around motors, generators and other high voltage equipment.

Construction of a RTD Probe

A PT100 probe is an assembly composed of an element, a sheath, a lead wire, and a termination or connection. Once the sensor is selected, the wiring and packaging requirements need to be determined. There are a number of ways to wire the sensors, along with an unlimited number of probe or sensor constructions to choose from.

In order to measure temperature, the RTD element must be connected to some sort of monitoring or control equipment. Since the temperature measurement is based on the element resistance, any other resistance (lead wire resistance, connections, etc.) added to the circuit will result in measurement error.

Except for the 2-wire configuration, all other wiring arrangements allow the monitoring or control equipment to factor out the unwanted lead wire resistance and other resistances that occur in the circuit. Sensors using the 3-wire construction are the most common design, found in industrial process and monitoring applications.

The lead wire resistance is factored out as long as all of the lead wires have the same resistance; otherwise, errors can result.

In this article the possible wiring alternatives for RTD probes are explained.


Probes may be terminated in a connection head, quick disconnect, terminal block, or extension wire. Other termination styles are available upon special request.

The Most Common Resistance Materials for RTDs

Learn more about this formulas here. The combination of resistance tolerance and temperature coefficient define the resistance vs. temperature characteristics for the RTD sensor. The larger the element tolerance, the more the sensor will deviate from a generalized curve, and the more variation there will be from sensor to sensor (interchangeability). This is important to users who need to change or replace sensors and want to minimize interchangeability errors. In this article main differences between Pt100 and Pt1000 are explained.

Origin Story of the RTD

The same year that Seebeck made his discovery about thermoelectricity, Sir Humphrey Davy announced that the resistivity of metals showed a marked temperature dependence. Fifty years later, Sir William Siemens proffered the use of platinum as the element in a resistance thermometer. His choice proved most propitious, as platinum is used to this day as the primary element in all high-accuracy resistance thermometers. In fact, the Platinum Resistance Temperature Detector, or RTD Pt100, is used today as an interpolation standard from the oxygen point (-182.96°C) to the antimony point (630.74°C).

Platinum is especially suited to this purpose, as it can withstand high temperatures while maintaining excellent stability. As a noble metal, it shows limited susceptibility to contamination.

The classical resistance temperature detector (RTD) construction using platinum was proposed by C.H. Meyers in 1932. He wound a helical coil of platinum on a crossed mica web and mounted the assembly inside a glass tube. This construction minimized strain on the wire while maximizing resistance.

Meyers RTD Construction Although this construction produces a very stable element, the thermal contact between the platinum and the measured point is quite poor. This results in a slow thermal response time. The fragility of the structure limits its use today primarily to that of a laboratory standard.

Another laboratory standard has taken the place of Meyers’ design. This is the bird-cageelement proposed by Evans and Burns. The platinum element remains largely unsupported, which allows it to move freely when expanded or contracted by temperature variations.

Strain-induced resistance changes over time and temperature are thus minimized, and the bird-cage becomes the ultimate laboratory standard. Due to the unsupported structure and subsequent susceptibility to vibration, this configuration is still a bit too fragile for industrial environments.

A more rugged construction technique is shown in Figure 37. The platinum wire is bifilar wound on a glass or ceramic bobbin. The bifilar winding reduces the effective enclosed area of the coil to minimize magnetic pickup and its related noise. Once the wire is wound onto the bobbin, the assembly is then sealed with a coating of molten glass. The sealing process assures that the RTD will maintain its integrity under extreme vibration, but it also limits the expansion of the platinum metal at high temperatures. Unless the coefficients of expansion of the platinum and the bobbin match perfectly, stress will be placed on the wire as the temperature changes, resulting in a strain-induced resistance change. This may result in a permanent change in the resistance of the wire.

There are partially supported versions of the RTD which offer a compromise between the bird-cage approach and the sealed helix. One such approach uses a platinum helix threaded through a ceramic cylinder and affixed via glass-frit. These devices will maintain excellent stability in moderately rugged vibrational applications. 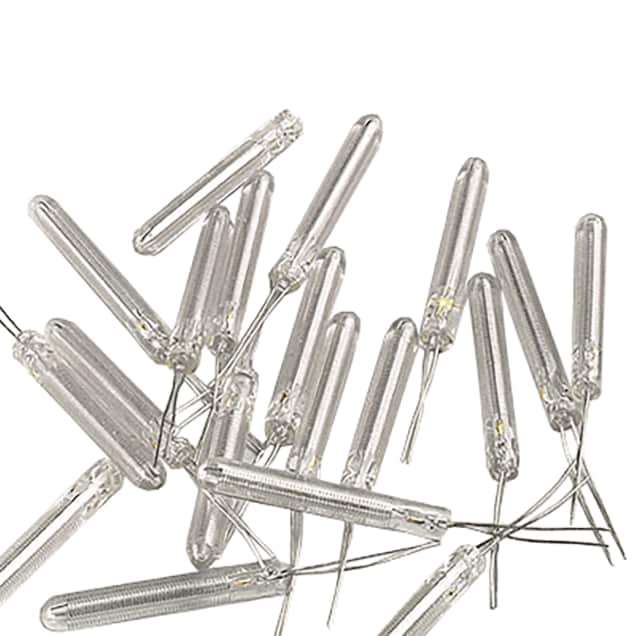 pt100 Elements
The pt100 element is the simplest form of RTD. It consists of a piece of wire wrapped around a ceramic or glass core. Because of their compact size, pt100 elements are commonly used when space is very limited. 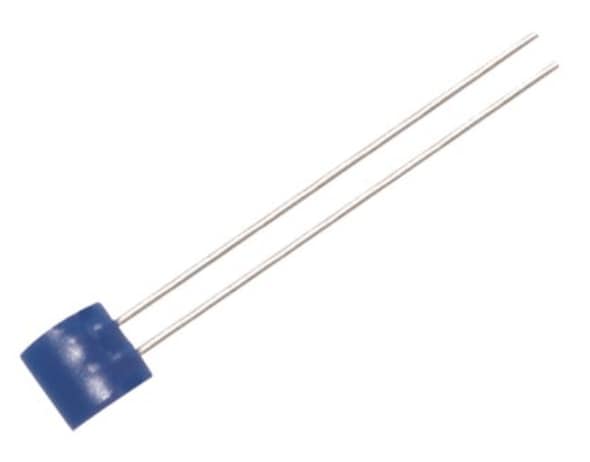 pt100 Surface Elements
A surface element is a special type of pt100 element. It is designed to be as thin as possible thus providing good contact for temperature measurement of flat surfaces. 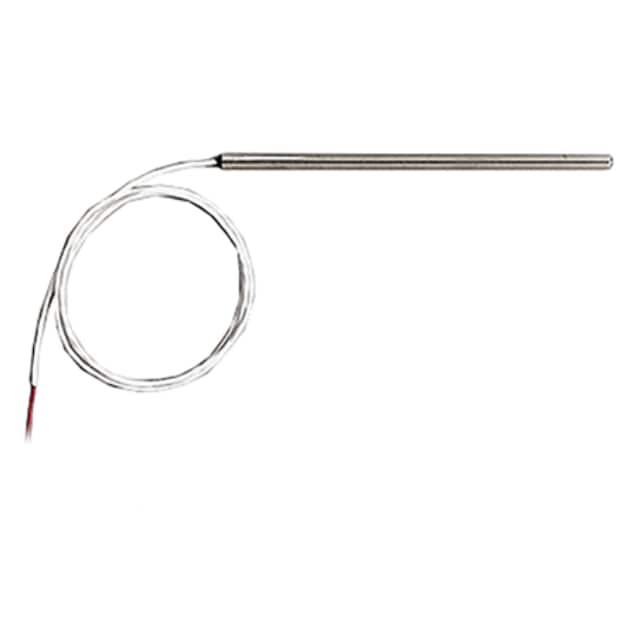 pt100 Probes
The pt100 probe is the most rugged form of RTD. A probe consists of an pt100 element mounted inside a metal tube, also known as a sheath. The sheath protects the element from the environment. OMEGA offers a wide variety of probes in various configurations.

RTD vs Thermocouple or Thermistor

Each type of temperature sensor has a particular set of conditions for which it is best suited. RTDs offer several advantages:

With a temperature range up to 850°C, RTDs can be used in all but the highest-temperature industrial processes. When made using metals such as platinum, they are very stable and are not affected by corrosion or oxidation. Other materials such as nickel, copper, and nickel-iron alloy have also been used for RTDs. However, these materials are not commonly used since they have lower temperature capabilities and are not as stable or repeatable as platinum. In this article how RTDs are compared with thermocouples is explained.

Measuring the Temperature of a Liquid with an RTD

Probe-type sensor styles are normally used for measuring liquids. They can be as simple as our general purpose RTD Probes PR-10 and PR-11 constructions, or as involved as our PR-12, 14, 18, or 19—with connection heads and transmitters. A popular choice is the quick-disconnect sensor. This can be used as is, with compression fittings for flexible installation, or with our PRS plastic handle for a handheld probe. When measuring the temperature of harsh environments such as plating baths or highly pressurized systems, sensors can be coated with a material like PFA Teflon®, or they can be housed in a thermowell to protect the sensor from extreme conditions.

Air and gas stream measurements are a challenge because the rate of transfer of temperature from the fluid to the sensor is slower than for liquids. Therefore, sensors specifically designed for use in air or gas place the sensing element as close to the media as possible. These Air Temperature RTD Sensors allow the sensing element to be nearly in direct contact with the air stream. With a housing design containing lots that allow the air to flow past the element, this construction is very popular in measuring air temperature in laboratories, clean rooms, and other locations. When the situation requires a little more protection for the sensor, an option is to use a design similar to the RTD-860. This design has a small diameter probe with a flange for mounting. The configuration will be a little slower to respond to changes in the air stream, but it will provide improved protection for the sensor.

Measuring the temperature of a surface can be one of the most difficult to make accurately. There are a wide variety of styles to choose from, depending on how you want to attach the sensor, how sensitive to changes in temperature the sensor has to be, and whether the installation will be permanent. The most accurate and fastest-responding surface RTD is our SA1-RTD sensor. When applied to a surface, it becomes virtually a part of the surface it is measuring. Surface sensors can also be bolted, screwed, glued, or cemented into place. The RTD-830 has a pre-machined hole in the housing to allow for easy installation with a #4 screw. The RTD-850 has a housing with threaded tip that allows it to be installed into a standard #8-32 threaded hole. This RTD is handy for measuring the temperature of heat sinks or structures where screw holes may already exist.

RTD Element
Sensing portion of the RTD which can be made most commonly of platinum, nickel, or copper. OMEGA features two styles of elements: wire wound and thin film.

RTD Probe
An assembly composed of an element, a sheath, a lead wire, and a termination or connection. The standard OMEGA™ RTD probe is made with a 100 ohm platinum (Pt100) European curve element (alpha = 0.00385).

Platinum RTD
Also known as Pt RTD, Platinum RTD's are typically the most linear, stable, repeatable, and accurate of all RTD's. Platinum wire was chosen by OMEGA because it best meets the needs of precision thermometry.

Thin Film RTD
Thin film RTD's are made up of of a thin layer of a base metal embedded into a ceramic substrate and trimmed to produce the desired resistance value. OMEGA RTD's are made by depositing platinum as a film on a substrate and then encapsulating both. This method allows for the production of small, fast response, accurate sensors. Thin film elements conform to the European curve/DIN 43760 standards and the "0.1% DIN" standard tolerance.

Sheath
The sheath, a closed end tube, immobilizes the element, protecting it against moisture and the environment to be measured. The sheath also provides protection and stability to the transition lead wires from the fragile element wires. OMEGA’s standard sheaths are 3 mm (1/8") and 6 mm (1/4") O. D. 304 stainless steel tubes. Other O.D.’s and materials are available upon request.

Read More
View this page in another language or region
RTD