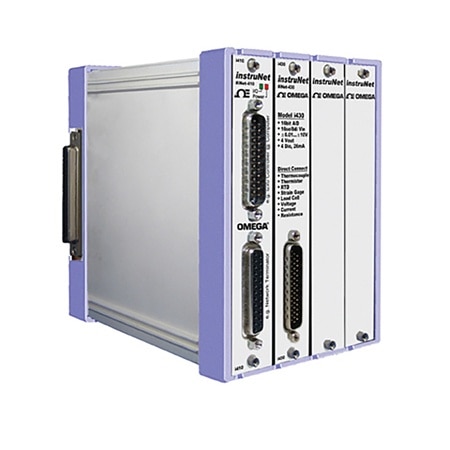 Edit these specs to order a different model. Not all combinations are valid. Options compatible with previous selections will be in bold.


Specs
Edit Model Options
The iNET-400 system is a low cost card cage that attaches to Windows computers via USB 2.0.
The advantage of a card cage is that you can select which I/O modules to install as needed to build a customized system. The instruNet card cage typically has one A/D measurement module and additional modules provide signal conditioning. The conditioned analog signal is routed to the A/D module via the backplane. This is dramatically different from comparable systems which place A/D measurement electronics on each module.

The advantage of the iNET-400 topology is cost. After the 1st module is installed, additional iNET-400 channels are conditioned at a very low cost per channel. iNET-400 measurement modules have universal inputs that enable one to directly connect each channel to one of: thermocouple, thermistor, strain gage, load cell, counter/timer, RTD, voltage, current, resistance and accelerometer. Absolute accuracy for all of these sensor types is specified. In some cases, the end user adds an external shunt resistor. The advantage of universal inputs is cost.

The iNET-410 card slides into slot #1 and then cables to the computer via a DB25 cable that connects to an instruNet controller. Also, an iNET-300 Power Adaptor cable is used to route power from an
iNET-312-8 desktop power supply to the iNET-410 interface card in slot #1, which in turn routes that power to the card cage backplane (i.e. pcb at back of card cage that attaches to all cards). See PDF attached for illustrated diagram.

The iNET-400 Card Cage needs at least one iNET-430 A/D card if analog voltages are to be measured. The iNET-430 cards includes an A/D converter and serves this purpose. The iNET-420 and iNET-423 cards contain various signal conditioning circuits and route signals along the backplane to the iNET-430 for measurement. This happens automatically and does not require programmer intervention, other than insertion of cards and attaching end user signals to the card’s front panel connectors.

iNET-240 instruNet DSP Card
Each instruNet Network is controlled by an instruNet DSP controller card that attaches to a Microsoft Windows computer. The iNET-240 attaches to a free USB 2.0 high speed port (requires Windows ? XP Sp2). Each Controller is an independent computer in itself that utilizes a powerful 32-bit DSP processor and onboard RAM to control all aspects of data acquisition along its network. All real-time tasks are off-loaded to this processor, therefore the host computer is not burdened with real-time issues. Between 1 and 4 controllers can be installed, space permitting, since each controller operates independently.

Connect up to 8 iNET-400 Card Cages
Each instruNet network supports up to 8 instruNet iNET-400 card cages.

instruNet Network
These devices are connected in a daisy-chain configuration to form a chain of Devices. Each network can be up to 300 meters long. All networks are anchored with an instruNet Terminator at the far end, and an instruNet Controller at the near end. This makes instruNet a cost effective method for designing large scale, high speed, multi-channel data acquisition systems.

iNET-423 Analog I/O Module
The iNET-423 provides 6 differential (DI) voltage input channels, 4 universal digital I/O (20 mA sink,
-10 to 30V) and requires the iNET-430 A/D module to measure voltages. The iNET-423 connects directly to voltage, thermocouple, thermistor, RTD, load cell, strain gage, potentiometer, current and resistance inputs. Each input channel passes through it’s own amplifier with a software selectable gain of 1 or 64 and optional low pass filter. The 8-pole iNET-500 analog low pass Butterworth filter daughter board is ideal for anti-aliasing. Between one and six filter daughter boards can be installed onto each iNET-423 card (one per channel). There are four different analog low pass filters, each with a different cut off frequency: iNET-500-380HZ, iNET-500-1KHZ, iNET-500-3300HZ and iNET-500-10KHZ.

For user manuals and application notes visit the instrunet web site.
All Models