Introduction to Air Velocity Measurement
Published August 28, 2018
Down
An anemometer is an instrument used to measure the speed or velocity of gases either in a contained flow, such as airflow in a duct, or in unconfined flows, such as atmospheric wind. To determine the velocity, an anemometer detects change in some physical property of the fluid or the effect of the fluid on a mechanical device inserted into the flow.

The hot wire anemometer is the most popular kind of constant-temperature anemometers. It consists of an electrically heated, fine-wire element (0.00016 inch in diameter and 0.05 inch long) supported by needles at its ends. While hot wire anemometers are best suited for clean gases at low velocities, venturi meters can also be considered for some liquid (including slurry) flow applications.

Constant-temperature anemometers are popular because of their high-frequency response, low electronic noise level, immunity from sensor burnout when airflow suddenly drops, compatibility with hotfilm sensors, and their applicability to liquid or gas flows.

Constant-power anemometers do not have a feedback system. Temperature is simply proportional to flowrate. They are less popular because their zero-flow reading is not stable, temperature and velocity response is slow, and temperature compensation is limited.

Most common anemometer applications
An anemometer usually measures gas flows that are in turbulent flow conditions. The vane anemometer, thermal anemometer and cup anemometer (typically used in weather stations) are mostly used to measure the mean velocity, while the hot wire anemometers are usually used when turbulence characteristics are being measured, such as transverse measurements in a cross-section. The term "thermal anemometer" is often used to mean any anemometer that uses a relationship between heat transfer and velocity to determine velocity.

ORIGIN STORY OF ANEMOMETERS The term anemometer was derived from the Greek words anemos, “wind,” and metron, “measure.” Mechanical anemometers were first developed back in the 15th century to measure wind speed.

Anemometers for weather stations
The cup anemometer (used in weather stations) measures the velocity in a plane perpendicular to the axis of its rotation cups. If the cup anemometer is mounted with the shaft perpendicular to the horizontal, it will measure only the component of the wind that is parallel to the ground. Other anemometers, such as vane anemometers, are used with the tip aligned with the total velocity vector. Before using an anemometer, it is important to determine how it should be positioned and what component of the total velocity its measurement represents. 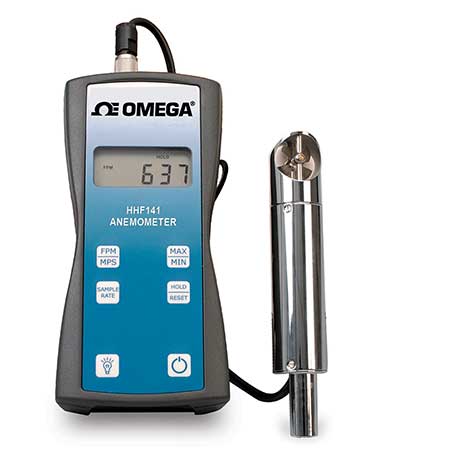 Vane Anemometers
Forms of rotating mechanical velocity anemometers may be described as belonging to the vane or propeller class. With this style of anemometer, the axis of rotation must be parallel to the direction of the wind and therefore typically horizontal. In open spaces the wind varies in direction and the axis has to follow its changes. In cases where the direction of the air motion is always the same, as in the ventilating shafts of mines and buildings for instance, wind vanes, known as air meters are employed, and give most satisfactory results. Vane anemometers are available with additional functions such as temperature, humidity and dew point measurements, volumetric conversion and data logging ability. 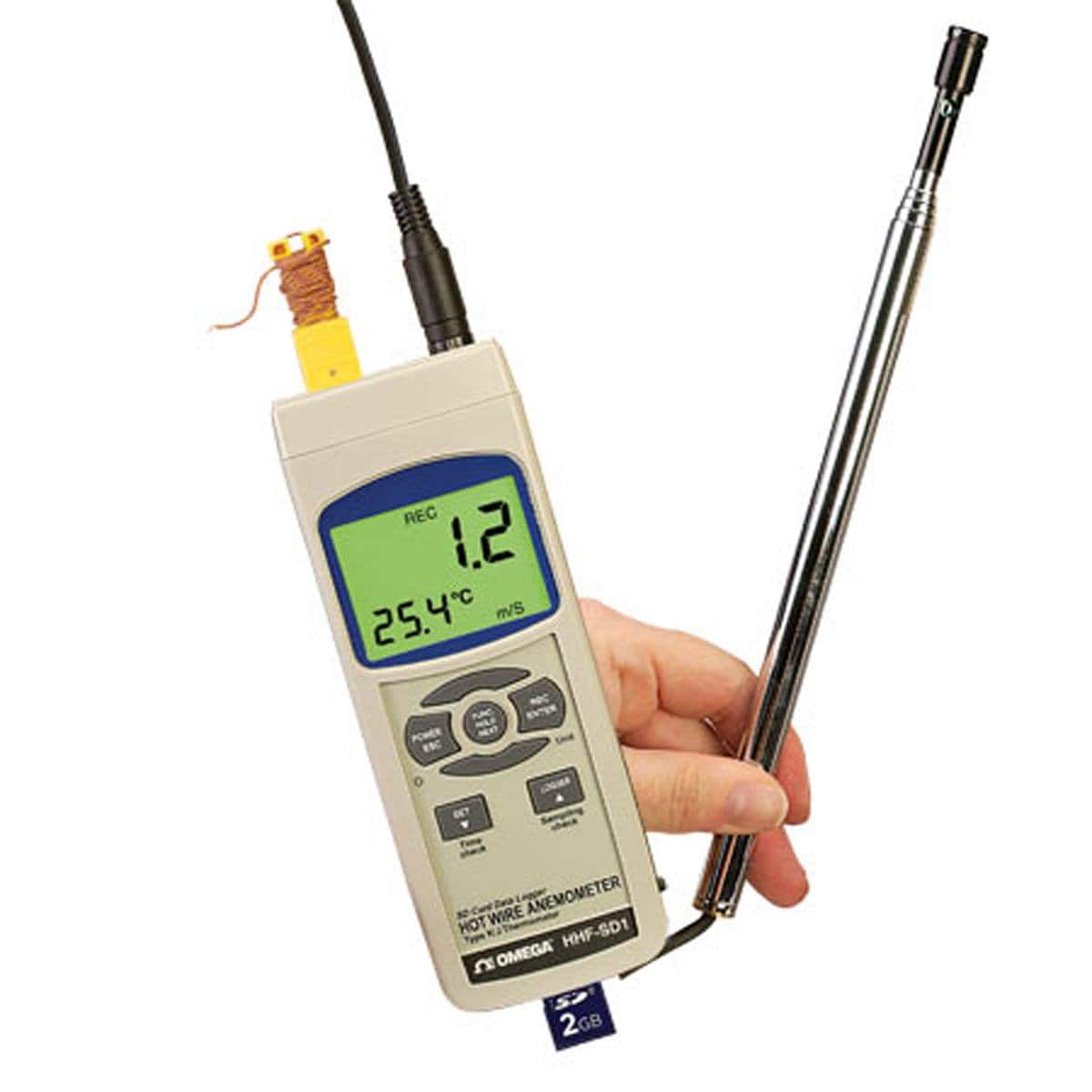 Thermal Anemometers
Thermal anemometers use a very fine wire (on the order of several micrometers) or element heated up to some temperature above the ambient. Air flowing past over has a cooling effect. As the electrical resistance of most metals is dependent upon the temperature of the metal (tungsten is a popular choice for hot wires), a relationship can be obtained between the resistance of the wire and the flow velocity.

Several ways of implementing this exist, and hot-wire devices can be further classified as CCA (Constant-Current Anemometer), CVA (Constant-Voltage Anemometer) and CTA (Constant-Temperature Anemometer). The voltage output from these anemometers is thus the result of some sort of circuit within the device trying to maintain the specific variable (current, voltage or temperature) constant. Additionally, PWM (Pulse Width Modulation) anemometers are also used, wherein the velocity is inferred by the time length of a repeating pulse of current that brings the wire up to a specified resistance and then stops until a threshold "floor" is reached, at which time the pulse is sent again.

Hot-wire anemometers, while extremely delicate, have extremely high frequency-response and fine spatial resolution compared to other measurement methods, and as such are almost universally employed for the detailed study of turbulent flows, or any flow in which rapid velocity fluctuations are of interest. Thermal anemometers are available with additional functions such as temperature measurement, data logging ability.

Thermal Anemometers with Velocity/Temperature Profiling
Thermal anemometer profiling systems have the smallest available sensor. The sensors measure both velocity and temperature. The multi-point data-logging system allows the user to profile flow characteristics in the application and analyze the data graphically. These are commonly used in wind tunnels for circuit board and heat sink analysis.

Cup Anemometers
A simple type of anemometer is the cup anemometer. It consisted of three or four hemispherical cups each mounted on one end of horizontal arms, which in turn were mounted at equal angles to each other on a vertical shaft. The air flow past the cups in any horizontal direction turned the cups in a manner that was proportional to the wind speed. Therefore, counting the turns of the cups over a set time period produced the average wind speed for a wide range of speeds. On an anemometer with four cups it is easy to see that since the cups are arranged symmetrically on the end of the arms, the wind always has the hollow of one cup presented to it and is blowing on the back of the cup on the opposite end of the cross.

When Robinson first designed his anemometer, he wrongly claimed that no matter how big the cups or how long the arms, the cups always moved with one-third of the speed of the wind. This was apparently confirmed by some early independent experiments, but it was very far from the truth. It was later discovered that the actual relationship between the speed of the wind and that of the cups, called the anemometer factor, depended on the dimensions of the cups and arms, and may have a value between two and a little over three. Every single experiment involving an anemometer had to be done all over again.

The three cup anemometer developed by the Canadian John Patterson in 1926 and subsequent cup improvements by Brevoort & Joiner of the USA in 1935 led to a cupwheel design which was linear and had an error of less than 3% up to 60 mph. Patterson found that each cup produced maximum torque when it was at 45 degrees to the wind flow. The three cup anemometer also had a more constant torque and responded more quickly to gusts than the four cup anemometer.

The three cup anemometer was further modified by the Australian Derek Weston in 1991 to measure both wind direction and wind speed. Weston added a tag to one cup, which causes the cup wheel speed to increase and decrease as the tag moves alternately with and against the wind. Wind direction is calculated from these cyclical changes in cup wheel speed, while wind speed is as usual determined from the average cup wheel speed.

Three cup anemometers are currently used as the industry standard for wind resource assessment studies. The NRG Systems #40C is the most commonly used cup anemometer for this purpose. For historical reasons, anemometer sizes are measured in crows.

Hot Wire or Vane Anemometer?
Sometimes called wind speed or air speed meters, anemometers are generally classified as hot wire or vane. The hot wire anemometer is best for accurately measuring air flow at very low velocities (eg., under 2000 ft/min). Some models are designed to measure velocities as high as 15,000 ft/min but still have very accurate measuring capability down to much lower speeds. The vane anemometer relies in a rotating impeller to sense air velocity. Vane anemometers are the best choice for measuring wind speed. Many have user selectable units of measure: ft/min, m/s, MPH, km/h and knots to accommodate a wide variety of applications. A thermoanemometer is any hot wire or vane anemometer having the added feature of air temperature measurement. Hygro-thermometer anemometers include the features of a thermo anemometer and a humidity sensor giving customer's complete environmental information. A data logging anemometer is designed to store measurements for later review. Some will download logged air velocity readings to your computer for review, graphing, and further analysis.

How to use Anemometers in Air Duct Traversing?
Anemometers are widely used for air duct balancing. This is accomplished by placing multiple anemometers in a cross-section of the duct or gas pipe and manually recording the velocity readings at numerous points. The mass flow rate is obtained by calculating the mean velocity and multiplying this by the density and by the cross-sectional area measurement of the duct. For cylindrical ducts, the log-linear method of traversing provides the highest accuracy because it takes into account the effects of friction along the walls of the duct. Because of the number of measurements, air duct traversing is a time-consuming task. Microprocessor based anemometers are available to automate this procedure.

Because of the small size and fragility of the wire, hot-wire anemometers are susceptible to dirt build-up and breakage. A positive consequence of their small mass is fast speed of response. They are widely used in HVAC and ventilation applications. Larger and more rugged anemometers are also available for more demanding industrial applications. To ensure the proper formation of the velocity profile, a straight duct section is usually provided upstream of the anemometer station (usually 10 diameters long). A conditioning nozzle is used to eliminate boundary layer effects. If there is no room for the straight pipe section, a honeycomb flow straightener can be incorporated into the sensor assembly. 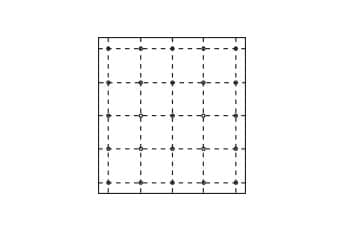 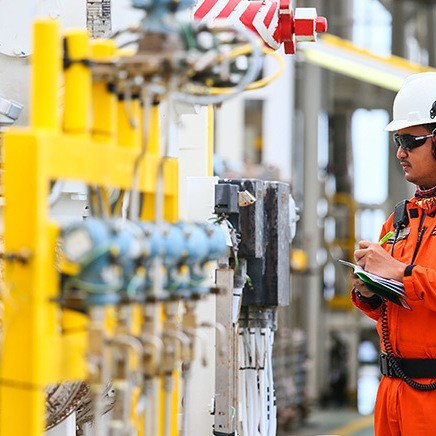