Dissolved oxygen (DO) is the term commonly used in liquid analytical work for the measurement of the amount of oxygen dissolved in a unit volume of water. It is an important indicator of the degree of usefulness of a sample of water for a specific application. The requirements of a given application determine the level of DO that can be tolerated.

In a water quality application, for example, where we want to maintain a fresh water stream fit for recreational purposes such as swimming and fishing and as a source of potable water, we must keep the DO content high. If the DO level falls too low, the fish will suffocate and conditions will become favorable for the growth of harmful bacteria.

In sewage treatment, solids are allowed to settle in large basins to which are added solutions rich in bacteria to speed the decomposition of the solids. There is an optimum DO level for this process and the level is maintained by mechanically aerating the "activated sludge" as the bacteria impregnated content of the basins is called. If the DO level falls too low, the bacteria die and the decomposition ceases; if the DO level is excessive, more power is used than necessary for aeration and the process becomes unnecessarily costly. Another important application of DO is the control of the quality of boiler make up water. In this case, since the presence of oxygen in the water will enhance corrosion and cause the build up of boiler scale that inhibits heat transfer, it is very desirable to hold the DO concentration to a minimum. 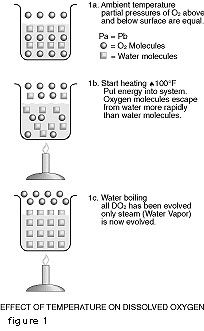 The amount of oxygen that a given volume of water can hold is a function of:

Effect of Partial Pressure of Oxygen on Dissolved Oxygen

A volume of water in contact with air will absorb air and hence oxygen until the pressure the absorbed oxygen exerts at the air-water interface equals the pressure exerted at the same interface by the oxygen in the air. At this point, the water is said to be saturated with oxygen. The amount of oxygen actually absorbed is quite small being of the order of about five or ten parts of oxygen to one million parts of water.

Effect of Temperature on Dissolved Oxygen

As everyone who has ever watched a pot boil knows, bubbles form on the side and bottom of the pot. The number and size of the bubbles increase with temperature. These are bubbles of air that have been dissolved in the water. Figure 1-A represents a beaker of oxygen saturated water at room temperature. The partial pressures of oxygen above and below the water surface are equal. Figure 1-B shows what happens when we begin to heat the system. In essence, we are putting energy into the system. The oxygen molecules which have a low solubility become readily energized by the infusion of energy into the system. The more sluggish water molecules step up their molecular activity at a slower pace. As a result, more oxygen molecules break through the air-water interface to the space above the water surface than water molecules do, leaving fewer oxygen molecules dissolved in the water. When the water boils as is shown in Figure 1-C, all of the oxygen molecules have been driven out of the water and now the water molecules are coming out of the beaker so fast that they form a layer of water vapor immediately above the water surface. This layer effectively isolates the water from atmospheric oxygen and the DO content of the water is zero. 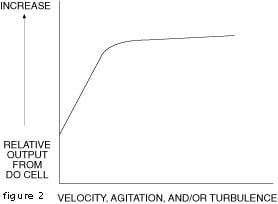 We can think of a volume of water as if it were a homogeneous medium with a number of holes interspersed throughout the volume. The pressure of the air immediately above the water surface will cause these holes to be filled with air. If now a substance such as salt is dissolved in the water, the dissolved salt will occupy some of the holes used by the oxygen molecules as they constantly shift from air to water and water to air in an equilibrium situation. The amount of oxygen the water can hold at given temperature has now decreased, but the partial pressure of the dissolved oxygen remaining in the solution must still equal the partial pressure of the atmospheric oxygen above the water surface. This situation is graphically portrayed in Figure 2 where curve A represents fresh water and curve B represents salt water.

Basically there are two general techniques for measuring DO. Each employs an electrode system wherein the dissolved oxygen reacts at the cathode producing a measurable electrochemical effect. The effect may be galvanic, polarographic or potentiometric.

One technique uses a Clark-type cell which is merely an electrode system separated from the sample stream by a semi-permeable membrane. This membrane permits the oxygen dissolved in the sample to pass through it to the electrode system while preventing liquids and ionic species from doing so. The cathode is a hydrogen electrode and carries a negative applied potential with respect to the anode. Electrolyte surrounds the electrode pair and is contained by the membrane. In the absence of a reactant, the cathode becomes polarized with hydrogen and resistance to current flow becomes infinite. When a reactant, such as oxygen that has passed through the membrane is present, the cathode is depolarized and electrons are consumed. The anode of the electrode pair must react with the product of the depolarization reaction with a corresponding release of electrons. As a result, the electrode pair permits current to flow in direct proportion to the amount of oxygen or reactant entering the system; hence, the magnitude of the current gives us a direct measure of the amount of oxygen entering the system.

Membrane probes readily lend themselves to conditions of high interfacial turbulence. In the case of the thallium probe, a high degree of turbulence may decrease the life of the probe because high turbulence will sweep away the thallium ions, thus causing electrode depletion. 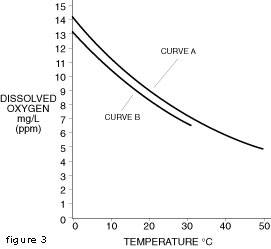 Although dissolved organic materials are not known to interface with the output from dissolved oxygen probes, inorganic salts are a factor in the performance of the probes. As we saw in Figure 2, we must apply a correction factor to the output of probes with membranes when used in salt solutions. The thallium probe requires the presence of salts in concentrations which provide a minimum conductivity of approximately 200 micromhos.

The two principle gaseous interferers of membrane probe measurements are chlorine and hydrogen sulfide. Sulfur compounds such as hydrogen sulfide, sulfur dioxide and mercaptans cause erroneous outputs from the thallium probe. Halogens do not interfere with the thallium probe.Figure 3 - Velocity, Agitation, and/or Turbulence Effects of Interfacial Dynamics on Probe Output.Figure 2 - Typical Curves Concentration of Dissolved Oxygen at Saturation

At low dissolved oxygen concentrations, pH variations below pH 5 and above pH 9 interfere with the performance of the thallium probe. This interference amounts to about ±0.5 mg/L DO per pH unit. The performance of membraned probes is not affected by pH changes. A serious limitation of the thallium probe is the fact that thallium is quite toxic and you must exercise care in using it. Membrane probes do not have this drawback. Since all of the oxygen that passes through the membrane reacts and since the amount of oxygen that passes through the membrane is a function of the partial pressure of the oxygen in solution, this technique actually measures the partial pressure of the oxygen in solution. It does not measure the actual concentration of the oxygen in the solution. For this reason, we must correct the readings of DO concentration given by this technique when some substance, for example salt, is dissolved in the water. As we saw above, the dissolved salt will reduce the number of holes available for carrying oxygen and hence reduce the actual concentration of oxygen without changing its partial pressure in the solution. If the electrode materials are selected so that the difference in potential is -0.5 volts or greater at the cathode, an external potential is not required and we have what is called a galvanic system. Some workers in this field, instead of relying on their selection of electrode materials to give them the required -0.5 volts difference of potential at the cathode, use an external potential source to give them the required potential difference. This system is known as a polarographic system. In either case, since the partial pressure of dissolved oxygen is a function of the temperature of the sample, we must either hold the temperature of the sample constant or compensate for varying sample temperature. Generally, the former is impractical so the latter is the more popular approach. A suitably selected thermistor or resistance thermometer in a properly designed electric circuit does a fair job of temperature compensation. 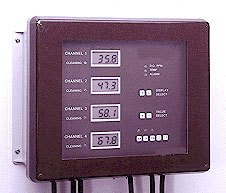 The second basic measuring technique uses an electrode system that consists of a reference electrode and a thallium measuring electrode. No semi-permeable membrane is used; the electrode system is immersed directly into the sample. Oxygen concentration is determined by measuring the voltage potential developed, in relation to the reference electrode, when dissolved oxygen comes in contact with the thallium electrode. At the surface of the electrode the thallous-ion concentration is proportional to the dissolved oxygen. The voltage potential developed by the cell is dependent upon the thallous-ion concentration in this layer and varies as the dissolved oxygen concentration changes. The cell output rises 59 millivolts for each decade rise in oxygen concentration. This technique uses a potentiometric system. The method measures directly the concentration of oxygen in the sample. As in the first technique, temperature compensation is a must and is achieved in about the same way. In both techniques, interfacial dynamics at the probe-sample interface are a factor in the probe response. A significant amount of interfacial turbulence is necessary and for precision performance, turbulence should be constant. This situation is portrayed in Figure 3. As long as the operating point remains above the knee of the curve, small changes in turbulence can be tolerated.

Reproduced with permission of Royce Instruments. 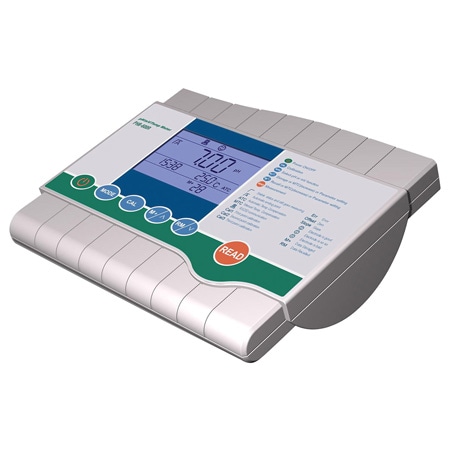 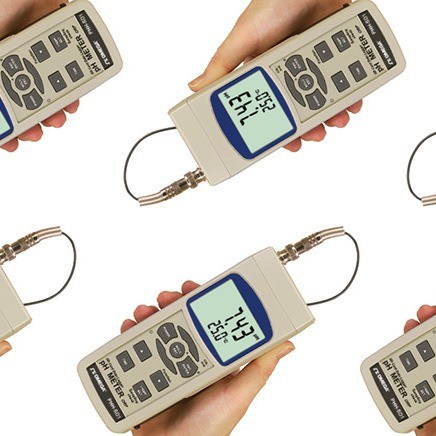 What is a pH meter and how does it work? – Omega Engineering Introduction to pH Measurement 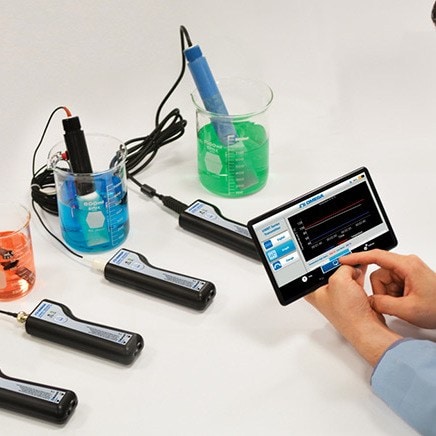