A Load Cell is a weight measuring device. They find their application in a variety of industries, from grocery stores to aerospace engineering. Their ability to give very accurate reading has gained them industry-wide acceptance as the go-to measuring apparatus for achieving accurate weight or pressure readings.

Why Choose Load Meters For Your Load Cell?

The load cell meter connects directly to the strain gauge. It takes the signal from the load cell and converts it into a displayed value. These digital meters are mounted on a panel from where they receive the power and the signals to display the measurement values.

Load cell meters also have some additional functionalities available, such as:

Analog functionality, wherein the device is capable of producing analog outputs such as current or voltage, proportional to the input signal.

Data interfacefunctionality, which allows the user to collect information for further analysis.

Load cell meters are extremely sensitive to the changes in electricity. So, even when the meter detects a slight change in the electrical signals coming from the strain gauge, they will represent that value in terms of weight. As such, selecting the right load cell meter is important to ensure end-to-end accuracy in physical measurements.

Following are some of the important parameters based on which a load meter or strain meter is selected:

LED or LCD lighting technologies are generally used in the digital display. An LED (Light Emitting Diodes) display uses diodes to light up the segments. These types of displays appear bright in the dark.

An LCD (Liquid Crystal Display) usually displays black digits on a light gray screen. These types of display consume less power as compared to LEDs, but are difficult to see in the dark without backlighting.

A load cell meter also comes with additional features/functionalities including:

Set point: This feature allows users to set control limits for weighing parameters. Once the load cell reaches or exceeds the set values, the unit sends an off control signal. Similarly, an on signal is sent when the value drops below the set point.

Alarms: Built-in audio or visual alarms to indicate once the set point values are reached.

Additional channels: The display meter with more than one channel to receive and record signals from multiple sources.

USB port: A USB port makes it easy to connect the display meter to a computer for data analysis. 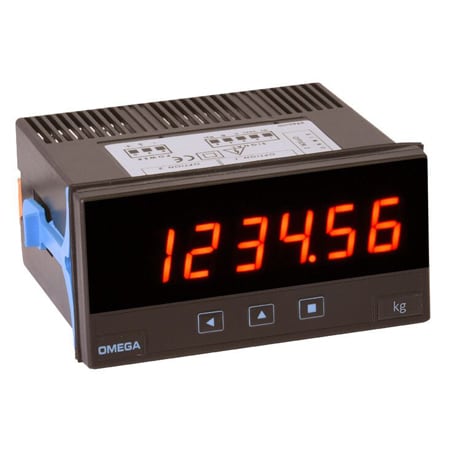