What is the gauge factor and strain units
Published April 17, 2019
Down

When external forces are applied to a stationary object, stress and strain are the result. Stress is defined as the object's internal resisting forces, and strain is defined as the displacement and deformation that occur. For a uniform distribution of internal resisting forces, stress can be calculated (Figure 2-1) by dividing the force (F) applied by the unit area (A):

Image Caption Title
Typical values for strain are less than 0.005 inch/inch and are often expressed in microstrain units:

Image Caption Title
Strain may be compressive or tensile and is typically measured by strain gauges. It was Lord Kelvin who first reported in 1856 that metallic conductors subjected to mechanical strain exhibit a change in their electrical resistance. This phenomenon was first put to practical use in the 1930s.

Image Caption Title
Fundamentally, all strain gauges are designed to convert mechanical motion into an electronic signal. A change in capacitance, inductance, or resistance is proportional to the strain experienced by the sensor. If a wire is held under tension, it gets slightly longer and its cross-sectional area is reduced. This changes its resistance (R) in proportion to the strain sensitivity (S) of the wire's resistance. When a strain is introduced, the strain sensitivity, which is also called the gauge factor (GF), is given by:

Image Caption Title
The ideal strain sensor would change resistance only due to the deformations of the surface to which the sensor is attached. However, in real applications, temperature, material properties, the adhesive that bonds the gauge to the surface, and the stability of the metal all affect the detected resistance. Because most materials do not have the same properties in all directions, a knowledge of the axial strain alone is insufficient for a complete analysis. Poisson, bending, and torsional strains also need to be measured. Each requires a different strain gauge arrangement

Poisson strain expresses both the thinning and elongation that occurs in a strained bar (Figure 2-3). Poisson strain is defined as the negative ratio of the strain in the traverse direction (caused by the contraction of the bar's diameter) to the strain in the longitudinal direction. As the length increases and the cross sectional area decreases, the electrical resistance of the wire also rises. 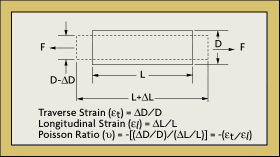 
The deformation of an object can be measured by mechanical, optical, acoustical, pneumatic, and electrical means. The earliest strain sensor were mechanical devices that measured strain by measuring the change in length and comparing it to the original length of the object. For example, the extension meter (extensiometer) uses a series of levers to amplify strain to a readable value. In general, however, mechanical devices tend to provide low resolutions, and are bulky and difficult to use.

Image Caption Title
Optical sensors are sensitive and accurate, but are delicate and not very popular in industrial applications. They use interference fringes produced by optical flats to measure strain. Optical sensors operate best under laboratory conditions.

The most widely used characteristic that varies in proportion to strain is electrical resistance. Although capacitance and inductance-based strain gauges have been constructed, these devices' sensitivity to vibration, their mounting requirements, and circuit complexity have limited their application. The photoelectric gauge uses a light beam, two fine gratings, and a photocell detector to generate an electrical current that is proportional to strain. The gauge length of these devices can be as short as 1/16 inch, but they are costly and delicate.

When selecting a strain gauge, one must consider not only the strain characteristics of the sensor, but also its stability and temperature sensitivity. Unfortunately, the most desirable strain gauge materials are also sensitive to temperature variations and tend to change resistance as they age. For tests of short duration, this may not be a serious concern, but for continuous industrial measurement, one must include temperature and drift compensation.

Each strain gauge wire material has its characteristic gauge factor, resistance, temperature coefficient of gauge factor, thermal coefficient of resistivity, and stability. Typical materials include Constantan (copper-nickel alloy), Nichrome V (nickel-chrome alloy), platinum alloys (usually tungsten), Isoelastic (nickel-iron alloy), or Karma-type alloy wires (nickel-chrome alloy), foils, or semiconductor materials. The most popular alloys used for strain gauges are copper-nickel alloys and nickel-chromium alloys. In the mid-1950s, scientists at Bell Laboratories discovered the piezoresistive characteristics of germanium and silicon. Although the materials exhibited substantial nonlinearity and temperature sensitivity, they had gauge factors more than fifty times, and sensitivity more than a 100 times, that of metallic wire or foil strain gauges. Silicon wafers are also more elastic than metallic ones. After being strained, they return more readily to their original shapes.

Around 1970, the first semiconductor (silicon) strain gauges were developed for the automotive industry. As opposed to other types of strain gauges, semiconductor strain gauges depend on the piezoresistive effects of silicon or germanium and measure the change in resistance with stress as opposed to strain. The semiconductor bonded strain gauge is a wafer with the resistance element diffused into a substrate of silicon. The wafer element usually is not provided with a backing, and bonding it to the strained surface requires great care as only a thin layer of epoxy is used to attach it (Figure 2-4B). The size is much smaller and the cost much lower than for a metallic foil sensor. The same epoxies that are used to attach foil gauges also are used to bond semiconductor gauges.

While the higher unit resistance and sensitivity of semiconductor wafer sensors are definite advantages, their greater sensitivity to temperature variations and tendency to drift are disadvantages in comparison to metallic foil sensors. Another disadvantage of semiconductor strain gauges is that the resistance-to-strain relationship is nonlinear, varying 10-20% from a straight-line equation. With computer-controlled instrumentation, these limitations can be overcome through software compensation.

A further improvement is the thin-film strain gauge that eliminates the need for adhesive bonding (Figure 2-4C). The gauge is produced by first depositing an electrical insulation (typically a ceramic) onto the stressed metal surface, and then depositing the strain gauge onto this insulation layer. Vacuum deposition or sputtering techniques are used to bond the materials molecularly.

Because the thin-film gauge is molecularly bonded to the specimen, the installation is much more stable and the resistance values experience less drift. Another advantage is that the stressed force detector can be a metallic diaphragm or beam with a deposited layer of ceramic insulation.

Diffused semiconductor strain gauges represent a further improvement in strain gauge technology because they eliminate the need for bonding agents. By eliminating bonding agents, errors due to creep and hysteresis also are eliminated. The diffused semiconductor strain gauge uses photolithography masking techniques and solid-state diffusion of boron to molecularly bond the resistance elements. Electrical leads are directly attached to the pattern (Figure 2-4D). 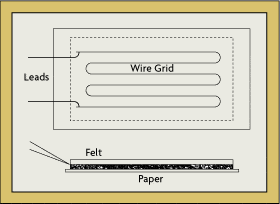 Image Caption Title
The diffused gauge is limited to moderate-temperature applications and requires temperature compensation. Diffused semiconductors often are used as sensing elements in pressure transducers. They are small, inexpensive, accurate and repeatable, provide a wide pressure range, and generate a strong output signal. Their limitations include sensitivity to ambient temperature variations, which can be compensated for in intelligent transmitter designs.

In summary, the ideal strain gauge is small in size and mass, low in cost, easily attached, and highly sensitive to strain but insensitive to ambient or process temperature variations.

The bonded semiconductor strain gauge was schematically described in Figures 2-4A and 2-4B. These devices represent a popular method of measuring strain. The gauge consists of a grid of very fine metallic wire, foil, or semiconductor material bonded to the strained surface or carrier matrix by a thin insulated layer of epoxy (Figure 2-5). When the carrier matrix is strained, the strain is transmitted to the grid material through the adhesive. The variations in the electrical resistance of the grid are measured as an indication of strain. The grid shape is designed to provide maximum gauge resistance while keeping both the length and width of the gauge to a minimum.

Bonded resistance strain gauges have a good reputation. They are relatively inexpensive, can achieve overall accuracy of better than +/-0.10%, are available in a short gauge length, are only moderately affected by temperature changes, have small physical size and low mass, and are highly sensitive. Bonded resistance strain gauges can be used to measure both static and dynamic strain. 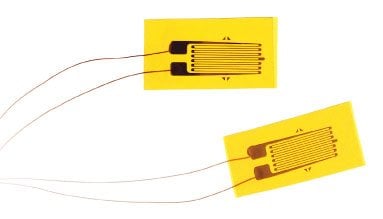 Image Caption Title In bonding strain gauge elements to a strained surface, it is important that the gauge experience the same strain as the object. With an adhesive material inserted between the sensors and the strained surface, the installation is sensitive to creep due to degradation of the bond, temperature influences, and hysteresis caused by thermoelastic strain. Because many glues and epoxy resins are prone to creep, it is important to use resins designed specifically for strain gauges.

The bonded resistance strain gauge is suitable for a wide variety of environmental conditions. It can measure strain in jet engine turbines operating at very high temperatures and in cryogenic fluid applications at temperatures as low as -452*F (-269*C). It has low mass and size, high sensitivity, and is suitable for static and dynamic applications. Foil elements are available with unit resistances from 120 to 5,000 ohms. Gauge lengths from 0.008 in. to 4 in. are available commercially. The three primary considerations in gauge selection are: operating temperature, the nature of the strain to be detected, and stability requirements. In addition, selecting the right carrier material, grid alloy, adhesive, and protective coating will guarantee the success of the application. 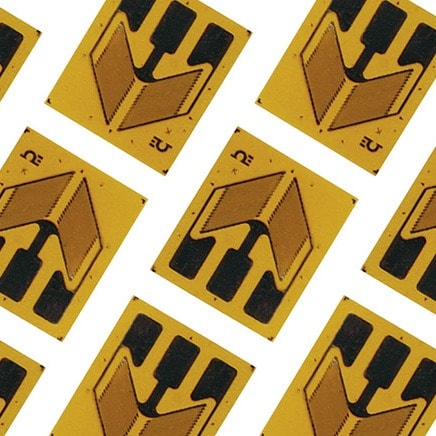