Turning up the heat: 12 MI thermocouple probes get tested in extreme conditions

In an intense heat environment, such as in solid waste incinerators, sintering powdered metals, or gas or oil fired-furnaces, you need a thermocouple probe that can withstand extreme heat. Mineral insulated cable (MI cable) is the ideal choice because of its low flammability even when exposed to high temperatures. It also resists oxidation, enabling precise measurement.

Because of MI cable’s use in critical processes in high-temperature environments, selecting MI cable sensors that will maintain their accuracy and durability over time is an important consideration. For example, it would be extremely dangerous if the temperature controllers used in nuclear plants to monitor core temperatures were not receiving accurate readings, and it would be difficult to repair or replace cables in that environment.

Testing MI Cables for Performance
To help determine the performance of different probes manufactured with MI cable on the market, including comparing the accuracy and durability of our own probes against competing brands, we conducted a cycle test. The test measured the performance on twelve probes, including four sample probes from two competing manufacturers and four probes from each of our two Omega sheath combinations. All probes had a diameter of 3.0 mm.

The test parameters included the ramping of each probe to 1100°C within 15 seconds and immediately cooling the probe down to ambient temperature within 45 seconds. These parameters were set based on a real customer application of a thermocouple probe placed inside the exhaust system of a diesel engine with a turbocharger.

Cycle Test Results
A review of the test data indicated that the Omega sheath combinations outperformed the competitor probes significantly, based on the average of each combination. The Omega™ 310 sheath was the highest performing of all probes, lasting on average 3 times longer than either competitor’s probes and approximately twice as long as other Omega combinations. However, in most cases, the 15-second heat cycle had to be extended up to 18 seconds as the probes aged in order to reach the 1100°C temperature limit. This may have been due to the oxidation of the sheathing and conductor materials. 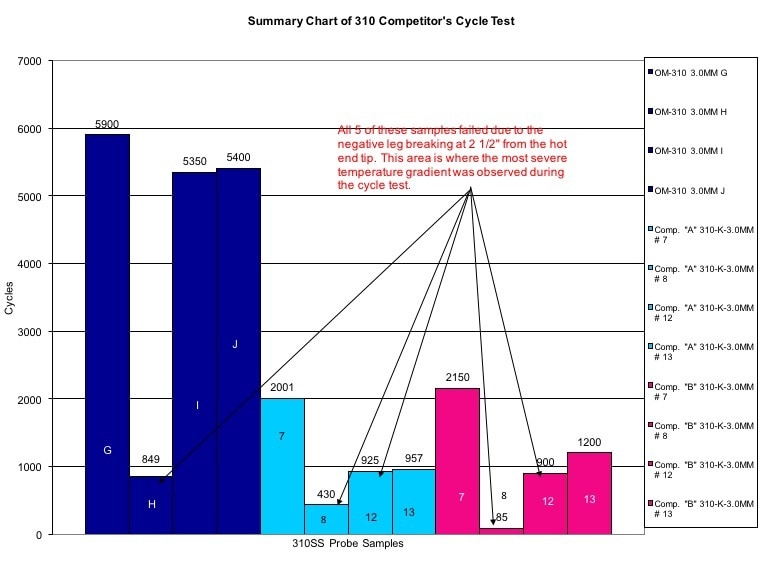 An evaluation of the four poorest performing probes revealed that all four probes had broken the negative thermos-element at approximately 2½” from the hot end tip. This coincides with the depth each probe saw when cycled into the induction coil.

An electromotive force test (EMF) of all probes after each 1000 cycles indicated that most probes had slight changes in their EMF outputs at the various temperature points tested over time.

Finally, because drift is a high concern in thermal monitoring, we also performed long-term static testing of the probes at temperatures of 2200°F. Three of the Omega probes show no drift until 60-100 days. Competitor probes begin to drift almost immediately.

Conclusion
While there is no guarantee of the lifespan of an individual probe, data from our own controlled testing environment indicates that the Omega 310 probes demonstrated superior performance over all other MI cable probes tested, including other Omega probes as well as competitor probes.